Book Culture Sells Out Its 100 Charlie Hebdo Issues In 2.5 Hours

The issue of the satirical French newspaper was the first to be published since the horrifying massacre at the paper's Paris office on January 7th, leaving 11 people dead, including cartoonists, writers, police officers and a building worker. Book Culture had been on a wait list for issues—it received two display copies on Friday—and sent an email to those on its customer mailing list on Sunday at 6 p.m.:

We wanted to let you know that this afternoon, Book Culture on Columbus received 100 copies of the new issue of Charlie Hebdo. We are not sure if or when we will receive more, so please stop in soon to get a copy. We are selling them at cost on a first come, first serve basis. We must limit them to 1 per customer, and we ask that you not attempt to resell the issues online. They come to us with the help of AirFrance, Uni Presse, and Bayard Press.

Book Culture owner Chris Doeblin told CBS News, "It's not something that we're going to profit on in the sense that we're going to sell the magazine and make money off of it. But it's not a business decision. It's a decision to stand up for the right to free speech."

We just got 100 copies of #CharlieHebdo in at #BookCultureOnColumbus - come pick up your copy pronto! pic.twitter.com/cFpaCg0fCQ 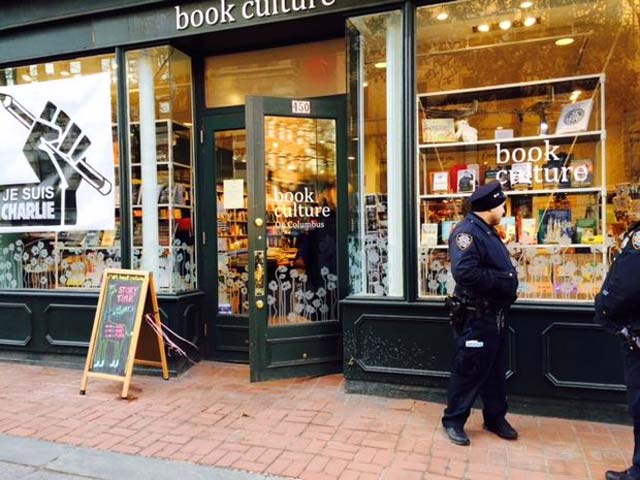 Manager Elizabeth Bogner told WNYC that after the store put up "Je suis Charlie" signs in the window, "We've had customers popping their heads in just to say, 'I'm really glad to see this.'"

By 7:29 p.m., the Book Culture Tweeted, "And that's a wrap! We are SOLD OUT!" In an email to customers, the store said, "In just a few short hours today, we sold out of the new issue of Charlie Hebdo.  We will be in touch as soon as we know if and when we will have more copies available.  In the meantime, we hope those who bought Charlie Hebdo today will share with friends and family.  We also invite you stop by Book Culture on Columbus to take a look at our display copy."

Today, a salesperson at the store said that they have requested more copies but are "not 100% sure" if they'll get them.

#Book culture
#charlie hebdo
#free speech
#je suis Charlie
Do you know the scoop? Comment below or Send us a Tip