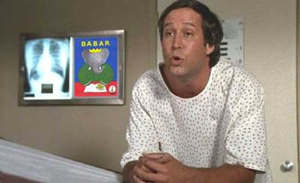 Persaud demurred and said he didn't think that was necessary, but hospital personnel held him down and attempted to examine the man against his will. The patient struggled and managed to strike one of the doctors, while begging "please don't do that." After he struck the doctor, he was involuntarily sedated and had a breathing tube inserted while his doctor completed the exam.

When he regained consciousness, Persaud was arrested, dragged from the hospital in his breezy hospital gown, and booked for assault. A lawyer eventually got the criminal assault charges against him dropped, but Persaud says he hasn't been able to work since the incident, suffers from post-traumatic stress syndrome, and is seeing a psychiatrist.

The case of the unsolicited rectal exam will go to trial at the State Supreme Court in Manhattan on March 31st. We asked Dr. Jay Parkinson (whose knowledge of the case is limited to the Post's article) to opine:

An adult patient who is in their right state of mind can refuse anything...a test, a treatment, whatever. However, if there is any question regarding that person's ability to make a conscious, informed decision, that person would lose the right to decide for him/herself, especially if the results of that test would impact the outcome of the situation.

In addition to being considered not of the mental capacity to decide for him/herself and If there is no person present appointed as this person's power of attorney and the situation is critical, then the doctors can do what they think is best for the patient. I would wager that the docs thought that this person was out of his mind when he fought like a child about a routine test. But of course, if you are a good physician, you can essentially talk anyone into undergoing anything because you believe it's in their best interest. It's about how you talk to them and how well you communicate the issue. This situation sounds as if there was very, very poor communication on both sides.

Since we know nothing about this person's state of mind during the incident (and considering that it was a blow to the head), I'm sure the case will revolve around proving this person's mental capacity at the time of the incident. But I definitely find it odd that an adult would fight hard enough to get themselves arrested over a stupid little test that is part of any trauma workup.