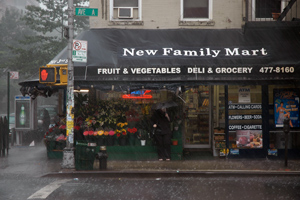 A few days after a Queens bodega owner was fatally shot in the face during a robbery attempt, The New York Times looks at the hazards of owning and operating the 24-hour stores that helps NYC remain the city that never sleeps. The police believe that the bodega robbery in South Ozone that resulted in its owner's death was just the latest in a series of robberies of Queens corner stores. 16 area stores have been robbed since March. It's always been a dangerous business:

During one 12-month stretch in the mid-1990s, more than 50 people — one a week — were killed in bodega robberies in the city. Homicides and overall crime in the city have fallen significantly since then, but bodegas remain dangerous places. Besides the Queens holdups, bodegas in Brooklyn and the Bronx have also seen robbery streaks in the last year.

The Times paints a picture of an industry that is almost exclusively owned and run by immigrants from all over the world, who work very long hours for low wages. It is also a family-oriented industry. The bodega owner killed in his shop last week was attempting to protect two of his daughters who were working with him. And many of the people the Times interviewed had family members working for or with them.

We love bodega workers and feel that they're the unofficial anchors of any good neighborhood. Last year we walked into our local 24-hour corner store and approached its sandwich counter. Before we could say anything, a worker prompted us with a suggestion of exactly what we were going to order. Responding to my surprised expression, the worker called out the name of the street I had lived on, years earlier and in an entirely different borough. The family business must have been expanding.