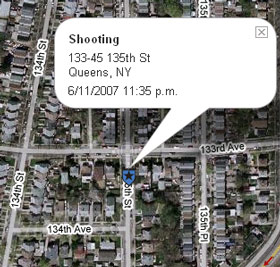 Last night, a bodega owner in Queens was shot in the face during an attempted robbery. Bolivar Cruz, father of seven, is now in critical condition, and police suspect that the robbery might be connected to another robbery - and to many others in the area.

Cruz was closing his Kennedy Mini Market at 131st Street in South Ozone Park when three men entered and shot him at 9:30PM. There was another robbery 10 minutes earlier; according to the Daily News, police believe "the three armed crooks target one location, then rob another nearby while cops respond to the first holdup."

WNBC reported that Cruz immigrated from the Dominican Republic in 1999 and was able to buy his store's building and other property neighborhood in the past few years. Neighbors are upset and shocked at the shooting, especially since Cruz was well-liked. One said he was "Like a family member ... I can't believe that this happened around here. It's just crazy."