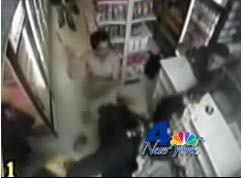 The owner of Munchies Bodega in Brownsville Brooklyn, Salah Ahmad, was indicted by a grand jury on assault and other charges for bludgeoning teenager Bunkless Bovian with a hammer. Bovian was placed in a medically induced coma following the incident last month, but has since been released from Brookdale University Hospital.

Initial accounts of the attack reported that Ahmad struck Bovian in the skull after a dispute over alleged shoplifting. Surveillance video later showed Ahmad coming to the aid of his nephew Hazam Kassim, who was being beaten by several teenagers behind the counter of the store where he worked.

Kassim was allegedly slashed with a razor during that attack. However, the Bovian family claims that Bunkless was attempting to break up a fight between his friends and Kassim.