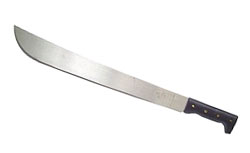 A Queens bodega owner defended his store against a gun-wielding robber by way of a machete. Johan Marte, who owns the Erick Deli Grocery in Woodhaven, explained to the Post, "He had a gun and I took him out."

The would-be robber, 28-year-old Omar Rodriguez, had fired twice before asking for money, but Marte managed to chop off the gunman's ear and finger. The Daily News has a photo of the robber that shows crime really doesn't pay - and Rodriguez is at Jamaica Hospital in serious but stable condition.

Marte said, "I cut his hand, I cut his finger, I cut everything. When the guy has a gun and you have a machete, it isn't easy." A resident spoke to the Daily News about Marte, "He doesn't bother nobody, unless you try to rob him. You do what you gotta do. He has all his money tied up in the store." Charges are expected against Rodriguez, while Marte was not charged since he acted in self-defense.

And last month, a convenience store employee scared off a would-be robber (armed with a fake gun) by wielding a huge axe.

#A Queens
#bodega
#crime
#daily news
#gun
#hospital
#Jamaica hospital
#machete
#money
#news
#queens
#robbery
#the daily news
Do you know the scoop? Comment below or Send us a Tip