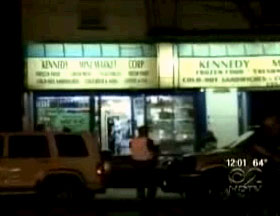 After two days on life support, the 56-year-old bodega owner, who was shot in the face during a robbery attempt, died yesterday morning and police continued their search for the group suspected of robbing a number of bodegas over the past four months. Police Commissioner Kelly said the robbers are "certainly" considered "dangerous," but Cruz's family wonders why the police didn't tell the community about the robberies.

One of Cruz's eight children, Karina Cruz, asked, "These guys have been out there 17 times and the police never did anything. And now my father had to die." Another daughter, Angelina Cruz, who had been working with her father during the Monday night shooting, said, "They should have warned us. There was no warning at all. I guess they didn't think this would happen again." Deputy Police Commissioner Paul Browne only explained, "When investigators deem there's enough information to deem it a pattern and in the interest of the investigation to make it public, they do so." City Councilman Peter Vallone, who heads the Public Safety Committee, told the Post, "I've heard many times that police don't release information about patterns they have in a timely manner."

So far, the police believe they have identified the getaway driver and shooter. A tipster, a McDonald's security guard/bounty hunter, told the police his friend knew someone who shot a man during a robbery. As for the bodega, the Kennedy Mini-Market in South Ozone Park, the family will shut it down. Daughter Jalissa said, "I hope the gunmen rot in jail. If justice doesn't make them pay, God will make them pay, They killed him over $300. They took away a life for money."