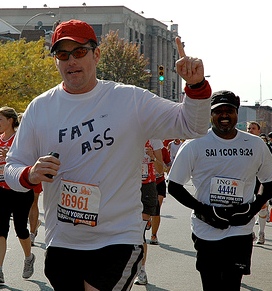 As Americans continue their slow, labored walk towards larger and larger coffins, New Yorkers are not far behind. According to a study published yesterday by the Trust for America’s Health, obesity rates rose in 31 U.S. States last year including New York where 22.4% of adults are obese – up by 0.7% from 2005.

New York State is tied for 38th place with New Hampshire while Mississippi can boast the widest waistlines, becoming the first state to break the 30% record. Numbers in the City were a bit heavier where 34% of adults were obese and another 22% were overweight. No states reported a decline in obesity rates last year.

Obesity is determined by a person’s body mass index (BMI), which is calculated by taking your weight in kilograms and dividing it by your height in meters squared. The score is interpreted as follows:

However, the BMI isn’t perfect as it can overestimate obesity in athletic people who have a lot of muscle mass (which weighs more than fat) and can underestimate it in really obese folk who may have muscle atrophy. You can calculate your BMI here. Obesity raises the risk of cardiovascular disease, diabetes, and other health problems.

The report also looked at New York’s overweight kiddies (aged 10-17) and found that we ranked 18th in the nation, with about 15% of children tipping 25 on the old BMI. Washington DC had the fattest kids at 22.8% and Colorado was the leanest state, with an adult obesity rate of 17.6%.

The causes of obesity are obviously manyfold with the thin quickly pointing out that the chubby just don't exercise enough. While there may be a hint of truth in this (the report shares that the lowest exercise rates were in the states with the highest obesity rates), poverty is also touted as a strong factor where the five poorest states were in the top ten most corpulent.

Photograph of a 2006 NYC marathoner by brainware3000 on Flickr