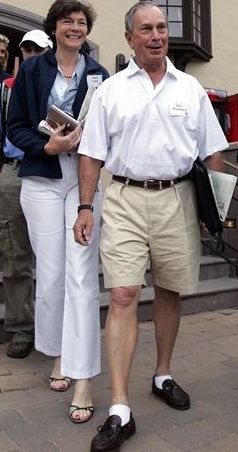 Apparently, Mayor Bloomberg uses the word unconscionable so much that the Times poured 969 other words into analyzing the verbal tic. According to the article, Bloomberg’s U-bombing is definitely excessive; he drops the heavy pejorative in situations that don’t merit it, like when a reporter dared ask him if his trip to Israel was calculated to woo Jewish voters. (“That’s unconscionable. You should be ashamed to ask that question,” he reportedly snapped.)

And when a restaurant in Chinatown started charging non-Chinese patrons more, the owners also found themselves stripped of conscience by the mayor. Linguists say that by using the word so much, Bloomberg may be sapping it of meaning – what guys in the language biz call “amelioration,” a sad fate that’s reduced words such as ‘awesome’ and ‘outrageous’ to washed-up has-beens lucky to be uttered ironically.

O.E.D. defines “unconscionable” two ways: when describing a person, it means “having no conscience.” When it applied to actions, it's “showing no regard for conscience; not in accordance with what is right or reasonable.” A spokesman for the mayor, Stu Loeser, gets the last laugh:

Mayor Bloomberg uses both meanings regularly, but not interchangeably. Gun dealers who sell multiple weapons to straw purchasers are unconscionable, in the mayor’s view. But the mayor also uses the second meaning of the word — excessive or beyond reasonable limits — at times, perhaps even more often. We leave it up to your readers to decide if newspaper items like this one fall into this latter category.

the "unconscionable" blitz points to Bloomberg’s imperious personality, which sees anyone opposing him as not just wrong but benighted.

Photograph of Mayor Bloomberg (with girlfriend Diana Taylor on the left) at the 2006 Allen & Co. conference in Sun Valley, Idaho by Elaine Thompson/AP