Most people are just too politically correct to say what everyone else is really thinking, so let's salute the bold patriot who compared the Bloomberg administration to the Taliban during a recent community meeting concerning Citi Bike. According to a Times roundup of Citi Bike grievances, the "inelegant analogy" to the Taliban was made during a heated bike share debate. But what's to argue? We defy anyone to gaze upon all the Citi Bike stations popping up around town and not think of that repressive regime known for human trafficking, opium smuggling, and... banning women from riding bicycles.

The Times article touches on many of the fun Citi Bike backlash stories we've already covered: NIMBYs in Fort Greene defacing the allegedly ugly Citi Bike stations, garbage immediately overwhelming Citi Bike racks, cars getting towed without warning to make room for Citi Bike, and an uproar over the loss of a beloved bike rack at The Shrine of the Cloak Gateway Plaza. 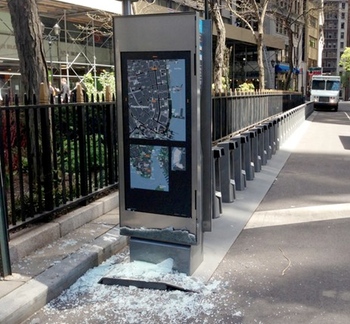 Of course, as one Tribeca resident puts it, "None of us are against bikes — most of us have bikes that we stow in our building." Indeed, some of their best friends are bikes! “But why they put these giant racks in these little streets is crazy to me," the Tribeca resident in favor of luxury private bike parking adds.

Yes, nobody has anything against bikes in general, but why can't they stay where they belong among their own kind in Bushwick or Bed-Stuy, where there's plenty of room for tall bike jousting and Taliban-inspired terrorist plotting. (So far, by the way, the DOT refuses to divulge how many times a day Commissioner Janette Sadik-Khan gets mistaken for Abdul Rahman Zahed.)

But with Citi Bike advancing across New York just like Hitler's armies swallowed up Europe, the only hope for its victims are the lawsuits. Last month a group of West Village residents sued to block a bike share station outside 99 Bank Street, and now the Co-op owners at The Cambridge on West 13th Street have filed their own lawsuit, arguing that—are you sitting down?—a Citi Bike docking station was supposed to go on the south side of West 13th Street BUT WAS ULTIMATELY INSTALLED ON THE NORTH SIDE!

The “eleventh-hour switch of locations,” represents a “false and deceptive report,” the plaintiff's argue, according to a copy of the filing obtained by the Post. A spokesperson for the City Law Department issued a statement which, loosely translated from Pashto, reads, "We just received this new lawsuit and are reviewing the papers, but we're confident the Court will uphold the siting of this station."

According to an announcement from the DOT today, 10,000 people have signed up for annual Citi Bike memberships, "greatly exceeding the rate of registrations for any other bike share system as excitement builds for Citi Bike’s May 27 launch." You might as well join them here and save yourself a brutal stoning at the hands of Bloombergiban militants.

#citi bike
#cyclists
#rhetoric
#taliban
#why god
Do you know the scoop? Comment below or Send us a Tip