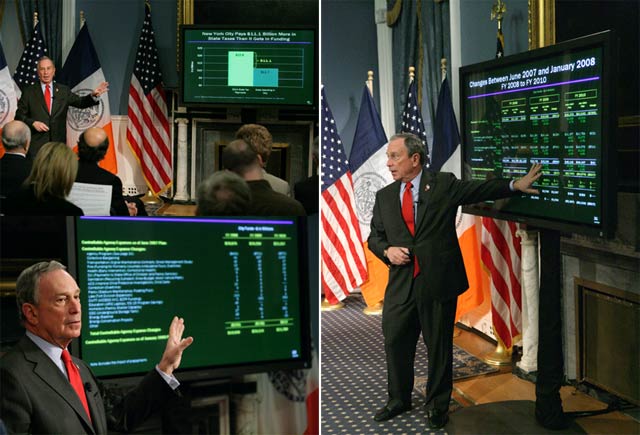 Mayor Bloomberg presented the preliminary 2008-2009 fiscal year budget which inclued cuts to almost every city agency, saying, "Everyone is going to have to tighten their belts." One big reason is the slowing economy and its effects on the city; for instance, the city had previously thought Wall Street profits would be $16.8 billion last year but they are more likely to be $2.8 billion.

The Daily Politics noticed the presentation had three pages of good news and 11 pages of bad news, like big budget gaps projected for 2010, 2011 and 2012. Belt-tightening will result in $1.42 billion in savings, but the $58.5 billion budget is actually a 3.7% increase over last year.

Spending for the Department of Education will drop $180 million for 2008 and then $324 million the next year; the NYPD loses $95.6 million (partly because the police force isn't as big as projections); and subsidies for libraries, cultural programs, CUNY tutoring and more will also be scaled back. Bloomberg also included our favorite perennial slide that shows the lack of support NYC gets from the state and federal governments while NYC supports them. Still, he's going to offer the $400 property rebate to homeowners and will attempt to extend the 7% property tax rate.

Mayor Bloomberg tried to sound reassuring, “If you live prudently and put some money away and work hard, you’re probably going to be O.K. Don’t sit there and hunker down and, you know, try to live in a tent.” Um, okay?

The NY Times thinks the Mayor's budget is prudent, but is concerned about the education cuts and wants more detail. City Council Speaker Christine Quinn called it "both sobering and fiscally responsible" while Quinn's possible 2009 mayoral rival City Comptroller William Thompson Jr. said the budget was "a testament to prudent fiscal planning."

The City Council must approve the budget by the summer.