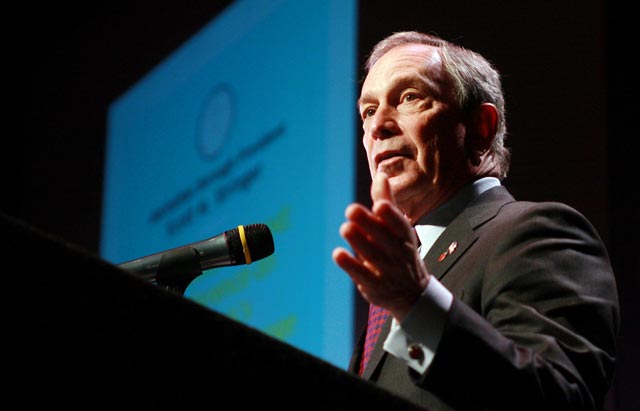 In the first poll to come out after his maneuvering to extend term limits from two terms to three, Mayor Bloomberg's approval ratings have fallen 9 points. The Marist poll puts him at 59%, and Politicker NY's Azi Paybarah writes, "It's not a bad number by any means, but it's the farthest he’s dropped since Marist’s August 2005 poll, which had him at 53 percent." He had a 68% rating from Marist last month and in July, he had 71% from a Quinnipiac poll.

Political consultant Joseph Mercurio tells the Post that Bloomberg's raiting are lower due to the economy, "I would expect his numbers as the economic crisis continues to go down lower. I don't think term limits is going to make that much difference [down the road]." The economic crisis is Bloomberg's main reason for wanting to run for mayor again.

However, the Daily News points out Bloomberg's lead over potential 2009 opponents is getting thinner (though it's still substantial): He leads Rep. Anthony Weiner 51% to Weiner's 37% and leads 52% to City Comptroller Bill Thompson's 32%. Marist pollster Lee Miringoff said, "Fifty-one percent is about as slim a majority as you can have at this point for an incumbent.. That is, I think, troublesome for the Bloomberg administration in terms of re-election prospects. He's ahead, but he's certainly far away from closing the door on that race."

Still, this is better than those days in 2003 when Bloomberg's approval rating was around 32%.

#approval rating
#election 2009
#mayor bloomberg
#term limits
Do you know the scoop? Comment below or Send us a Tip