Bloomberg Won, But What Exactly Did Happen Last Night?

Though the end result of last night's mayoral election doesn't come as much of a surprise, the closeness of the race shocked a lot of onlookers. After running a record-breaking $100 million campaign that won major endorsements and blanketed the city in nearly non-stop advertising, Mayor Bloomberg defeated the underfunded Democratic candidate Bill Thompson by only 5 percent of the vote, winning with 51 percent to his rival's 46. This comes after polls from the days before the election predicted Bloomberg ahead by double digit — some even anticipating a win almost as large as his 20 percent victory in 2005. The pollsters might have some explaining to do.

According to the Times, the closeness of the race might be linked to what voters considered Bloomberg’s "heavy-handed move" to overturn term limits and his exorbitant campaign war-chest, which gave him a 14-to-1 spending advantage. Relying on exit polls, the paper reports that 45 percent of voters said term limits were a factor in their decision to vote against Bloomberg, and about the same number cited his exorbitant campaign spending as an important issue. That said, 70 percent of voters said they "approved of his job performance." 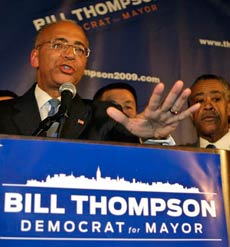 The Daily News thinks Thompson could have been a contender if Democrats hadn't dubbed him a lost cause months ago. The tabloid wonders what would have happened if the Comptroller and Mayoral hopeful had landed a full-fledged endorsement from President Obama instead of "a squishy, nonendorsement-endorsement of Thompson, after his press secretary couldn't even come up with Thompson's name."

An unnamed senior Thompson adviser bolsters the argument: "There are a number of people around Bill who felt that he was let down and that, yes, it could have helped if President Obama had campaigned with him...But that's not who Bill Thompson is. He has not been bitter." The News also calls out Vice President Biden, Rev. Al Sharpton, and City Council Speaker Quinn — who held her Thompson endorsement until the last minute.

A final factor might have been turnout, which was reportedly dismal. According to current numbers from NY1, only 1,100,649 New Yorkers cast ballots — less than the 1,235,997 who voted in Bloomberg's 2005 trouncing of Democrat Fernando Ferrer. An unnamed Bloomberg aide expressed his surprise about the rather tight outcome to Times: "Everybody was shocked." But according to Bloomberg's Twitter, the Mayor isn't stressing the five-point margin. "Thank you #NYC Humbled, proud, & excited to have the opportunity to serve you for another 4 yrs!"