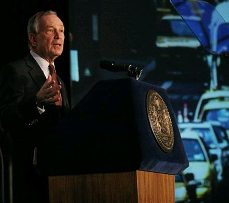 Even though Mayor Bloomberg doesn't belong to a political party, he has confirmed he will help NY State Republicans face re-election this year. Why? It boils down to his pet failed project, congestion pricing.

The Daily News reports Mayor Bloomberg as saying, "I've said repeatedly, I'll help those who help this city. The Republicans in the state Senate were willing to vote for congestion pricing and the Democrats were not." Indeed, when Assembly Leader Sheldon Silver essentially killed the plan by not holding a vote on it, Bloomberg pointedly said thanked Republicans Senate Majority Leader Joe Bruno and Assembly Minority Leader Jim Tedisco for their support.

One State Democrat who did support congestion pricing was Governor Paterson, who recently told WCBS 2, "I think it's a viable solution." Paterson is putting together a independent commission to evaluate the plan, headed by Richard Ravitch, who formerly chaired the MTA between 1979 and 1983. A NY Times editorial points out, "Only state lawmakers can provide the stable financing that the [mass transit] system needs."