Bloomberg Will Not Run For President 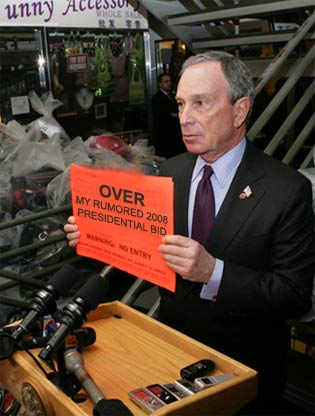 Ending months of speculation, Mayor Michael Bloomberg confirmed he will not run for president in the 2008 election. And he did it with an op-ed in the NY Times, titled, "I'm Not Running for President, but..."

The op-ed starts out with Bloomberg calling all the current candidates "smart" but believes "the candidates seem afraid to level with" the American public, because the candidates aren't offering "innovative ideas, bold action and courageous leadership" on issues like the economy, gun control, education and immigration. (Subtext: Bloomberg can, but that's neither here nor there now.) Anyway, onto the money quote:

I listened carefully to those who encouraged me to run, but I am not — and will not be — a candidate for president. I have watched this campaign unfold, and I am hopeful that the current campaigns can rise to the challenge by offering truly independent leadership. The most productive role that I can serve is to push them forward, by using the means at my disposal to promote a real and honest debate.

In the weeks and months ahead, I will continue to work to steer the national conversation away from partisanship and toward unity; away from ideology and toward common sense; away from sound bites and toward substance. And while I have always said I am not running for president, the race is too important to sit on the sidelines, and so I have changed my mind in one area. If a candidate takes an independent, nonpartisan approach — and embraces practical solutions that challenge party orthodoxy — I’ll join others in helping that candidate win the White House.

Hear that, Clinton, McCain and Obama? If you can offer an independent, nonpartisan approach, Bloomberg's endorsement - and potentially his checkbook - is yours. Guess Newsweek's Jon Meachum is pretty upset Bloomberg isn't running, not to mention the consultants, political organizations, media outlets and current Bloomberg staffers that would be benefited from the $1 billion Bloomberg would have spent on a presidential campaign.

Bloomberg, who was charmed by presidential ambitions and kept us guessing, but then grumpy when moderate candidates (like Obama and McCain) surged, will work for The Bloomberg Family Foundation after serving his second term as mayor and be a philanthropist. And a media mogul.