Bloomberg Wants to Travel, Not Campaign 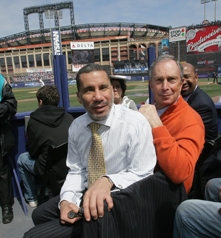 Everyone's favorite potential candidate for something, Mayor Michael Bloomberg, tried to quiet rumors of more years in public office by telling reporters, "One of the things I would love to do is spend some time traveling the state. There are some wonderful places all through the state. I used to be a Boy Scout. I used to really spend a lot of time outdoors. I'd love to do that again, but not as a candidate, and not as governor. I'd like to do it as a tourist."

Of course, Bloomberg tried to be even more explicit about those third term rumors: "The truth of the matter is, I’ve said a number of times I favor term limits and I’m looking forward to being mayor on December 31, ’09, and then doing something else...I’m not seeking a third term."

He said he'd probably work in philanthropy, giving $225 million away each year. Which sounds like a great post-mayoral thing to do--he does have billions to spend. But he's trying hard to show he's not a lame duck - he was in DC today to discuss illegals guns in front of Congress, chat with Nancy Pelosi, and announce a health information technology roadmap with the New Democrat Coalition.

#election 2009
#mayor bloomberg
#nancy pelosi
Do you know the scoop? Comment below or Send us a Tip