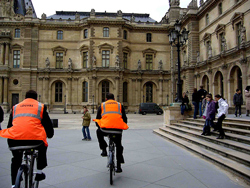 Mayor Bloomberg spent yesterday in Paris and paid particular interest to the City of Light's bike-sharing program. The Parisian program started in July and has thousands of bikes secured around the city's streets. People who need a quick ride can rent the bike's by the half hour, with the first 30 minutes free and increasing fares for each additional half hour to discourage lengthy rentals. Bloomberg seemed curious about the program, but acknowledged that there were some differences between Paris and NYC that could make an identical setup difficult. He cited the sometimes poor conditions of city streets due to changes in the weather (i.e. huge potholes) and a lack of bike lanes. 100,000 people signed up to use the Paris bike-share program for a full year and five million rides had been taken since the program's inception.

This summer the Forum for Urban Design sponsored NY Bike Share, a multi-day pilot program to see how bike-sharing could work in New York. Operating out of a storefront on Kenmare St., about 25 people a day were able to borrow bikes for 30 minute rides.