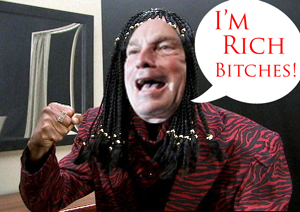 Presidential hopefuls can scurry around the country, choking down rubber chicken dinners and hustling for campaign cash, but Mayor Bloomberg knows that it's best to just sit back and let one's money work for you. He's certainly busy working for his $1-a-year salary, and even pays for his own travel when on jaunts to places like London where he's addressing another world capital. Still, our Mayor managed to more than double his wealth from last year. Forbes magazine says that Bloomberg's net worth rose from $5.5 billion to $11.5 billion, launching him from the seedy straits of single-digit billionaires into the elevated realm of the country's top-25 richest Americans.

Back in April, the New York Post reported that the mayor was worth $13.6 billion, meaning that the poor guy has lost more than $2 billion in just five months. During his last run for mayoral office, however, Bloomberg spent about $100 per vote needed to get elected. With only about 62 million votes needed to get elected President, Bloomberg just about made enough last year to finance a win on the national stage if he wants to spend as generously as he did in New York.