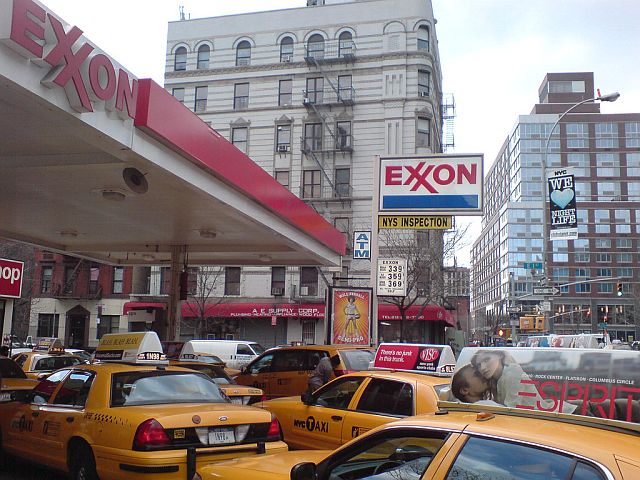 Photo of cabs fueling up during those Halcyon days of $3.50 gas courtesy 54 East.

In 2004 – the year taxi fares increased 26%, President Bush got re-elected, and Janet Jackson’s nip slipped – the average price of gas in the city was $1.80 a gallon. It now costs around $4.45 a gallon, with no signs of diminishing, and there is increased clamor from cabbies for the city to institute a surcharge of $1 per ride. But Taxi and Limousine Commission chairman Matthew Daus yesterday declared that "under no circumstance" would the TLC implement a surcharge.

Eleven other cities have instituted temporary fuel surcharges to ease the impact on cabbies, but Mayor Bloomberg rebuffed calls for a surcharge yesterday, putting the onus on drivers to start using more fuel-efficient taxis. (Yesterday Bloomberg announced his plan to reduce energy consumption and greenhouse gas emissions from the city's municipal buildings.) Driver and organizer Bill Lindauer told the Times, “This is how the mayor treats working people? I believe the mayor is a bold, innovative and pragmatic man, but he has an Achilles’ heel; he doesn’t feel for other people.” Loubert Alexander, another owner-operator, said, “Two years ago, a fill-up cost $40; now it’s double that.”

According to the TLC, the average daily gross earnings for a driver who owns his or her own vehicle and leases a medallion were $290.75 in June, basically unchanged from June 2007. But drivers say the pump is sucking them dry and their hourly income has plummeted; according to the Sun, some drivers are making as little as $12 per hour depending on the fuel efficiency of their vehicles.