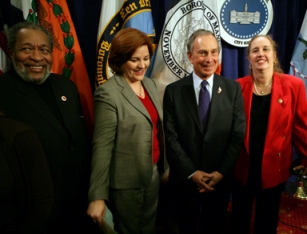 Mayor Bloomberg was beaming when he, City Council Speaker Christine Quinn and other City Council members gathered for a press conference to hail the Council's approval of congestion pricing last night, 30 votes in favor to 20 against. Bloomberg, who introduced the idea of charging drivers entering Manhattan (at 60th street or below) a fee, said, "The sun is shining on New York City's future today."

He also lavished praise on Quinn, noting her "principled leadership" and commitment to the city and its residents, "Christine Quinn really did stand up and, with the power of persuasion and the arguments that we all know make a lot of sense here, she managed to get 30 votes when I think most people did not expect this to pass."

Quinn herself said she was proud of her fellow Council members for voting for the plan even though it's a tough sell. Councilman Michael McMahon said he was taking a "leap of faith" by approving the plan while Councilman David Yassky was more emphatic, "We can't remain the capital of the world if it takes a half-hour to go five blocks in Midtown."

It was still considered a narrow vote (some critics said the Mayor, in trying to entice Council members to back the plan, promised to host fundraisers and back their projects). Opponents were vocal about their unhappiness: Councilman Leroy Comrie said, "I have absolutely no faith in the MTA being honest with New Yorkers" (the MTA would get revenue from the plan) and Councilman Lewis Fidler said, "What's next? We're going to charge a user fee to go into Central Park because it's crowded?"

The State Legislature must now decide whether to approve congestion pricing by April 7, in order to qualify for $354 million in federal funds. While Governor Paterson and State Senate Majority Bruno support the plan, Assembly Leader Silver has been less enthusiastic, to the point of Bloomberg being kinda pissed.

#City Council
#congestion pricing
#mayor bloomberg
#speaker quinn
Do you know the scoop? Comment below or Send us a Tip
A new Gothamist is coming! We’ve moved comments over to our beta site. Click here to join the conversation and get a preview of our new website.