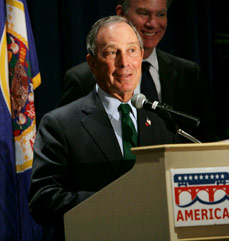 Mayor Bloomberg kept himself in the middle of national political scene by speaking at an Independent Party fund raising breakfast in Minnesota. While he was expected to tout John McCain a little, Bloomberg had spent equal time praising both McCain and Barack Obama to the Independents, noting the candidates' willingness to buck party lines.

Once considered to be on the short list as a potential running mate for both candidates, the mayor has refused to officially support either thus far. Yesterday, he didn't make it sound like an endorsement is coming anytime soon, "I may not make it any time sooner than walking into the polling booth. I may not tell anybody other than that machine."

Bloomberg also criticized the primary system, saying NYC residents should stop paying for primaries that only help the two major parties, pointing out taxpayers shell out $10 million for primaries when 700,000 voters can't participate since they aren't registered with either party. Of course, one those unaffiliated voters this year was Bloomberg himself, due to his relatively new status as an independent.

One endorsement the mayor did make: what he'd like for his last meal, saying, "I always said if I had one breakfast to eat before I die, it would be Wonder Bread toasted, with Skippy Super Chunky melted on it, slices of overripe banana and fresh crisp bacon."