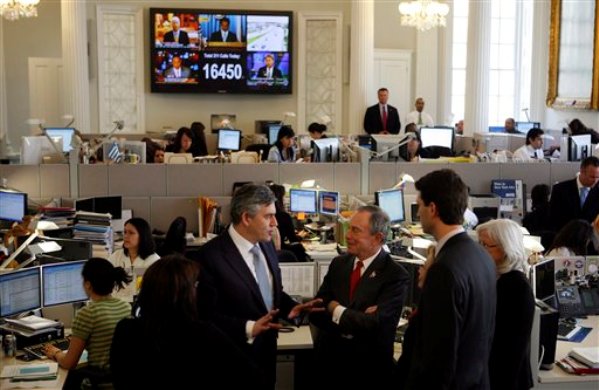 Mayor Bloomberg may be a lame duck mayor, but he's super busy. Earlier this week, he recommended to House Speaker Nancy Pelosi that the United State should open its markets. Yesterday, he met with British Prime Minister Gordon Brown and showed off his open-cubicle bullpen (and huge plasma TV). And today, besides hosting the 2008 New York City Luncheon at the Four Seasons, the Mayor had a peom published in today's Metro, in honor of Poem in Your Pocket Day.

Here's the Mayor's poem, "Press Conference" (note--Bloomberg is the rhyming type of poet):

Sir, you said poetry is a delight…
Right.

Reading it makes you smarter, more mature?
Sure.

But is it better for people not to read verse?
Worse.

All these short answers. Why?
I -

Follow-up! What do you do in your free time?
Rhyme.

Could poems appeal to the Press?
Yes.

But can they help with traffic congestion?
Next question.

There's an open-mic reading of poems at Bryant Park until 3 p.m.

#Bullpen
#gordon brown
#mayor bloomberg
#poem
#poetry
Do you know the scoop? Comment below or Send us a Tip