Now that he's going to be mayor for another four years, Mayor Bloomberg has been reaching out to the Democrats. Yesterday, he had coffee with Public Advocate-elect Bill de Blasio (their klatsch is pictured at left) but City Comptroller-elect John Liu declined to meet with Bloomberg, saying he was too busy. But the NY Times points out Liu later said, "A long time ago, the people of New York decided there would be no king nor a monarch in New York City."

Liu was actually the highest vote-getter in Tuesday's election: According to unofficial counts, the Observer reports that he got a total of 696,330 votes; de Blasio had 652,511, while Bloomberg earned 557,059 ("414,242 came from the Republican line and 142,817 came from the Independence Party") and Bloomberg's challenger Bill Thompson got 478,521. The Village Voice's Wayne Barrett says, "Bloomberg will also get the lowest total vote of any mayoral winner in a two-candidate race since 1917, when John Hylan got 314,000 votes. Ed Koch got 868,000 votes when he ran for a third term in 1985, hundreds of thousands more than Bloomberg." Oh, and Bloomberg thinks he'll eventually get together with Liu.

The NY Times drills down into the vote with a very cool interactive map—you can see how your district ended up voting by zooming into individual blocks! 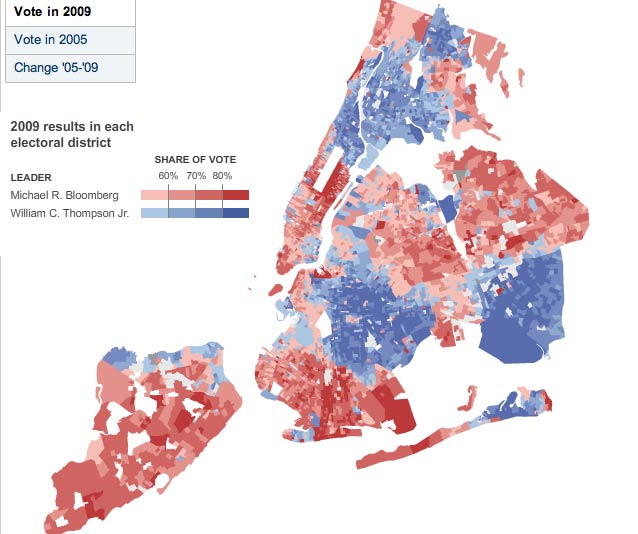 The NY Times' interactive map showing the vote by block

And, given that the voter turnout was about 1.1 million, 15% down from 2005, the paper also spoke to some non-voters: A Long Island City woman who was leaning towards Bloomberg forgot to vote but was "scared" by the small margin of his win, "I was convinced he was going to win; I didn’t think my vote would matter. I wonder how many more people felt the same way and didn’t vote. And I wonder what would have happened if everyone who thought about voting had actually gone out to vote." And a Brooklyn woman who would have voted for Thompson to show her anger at the Bloomberg administration said, "I wished we’d have a new mayor, but if we don’t have it, it’s partly my fault. And because I didn’t vote, I can’t really complain when things go wrong."

And for more details about the elections, here are a dozen insights from the Times: Apparently turnout was down in areas Bloomberg was supposed to do well!