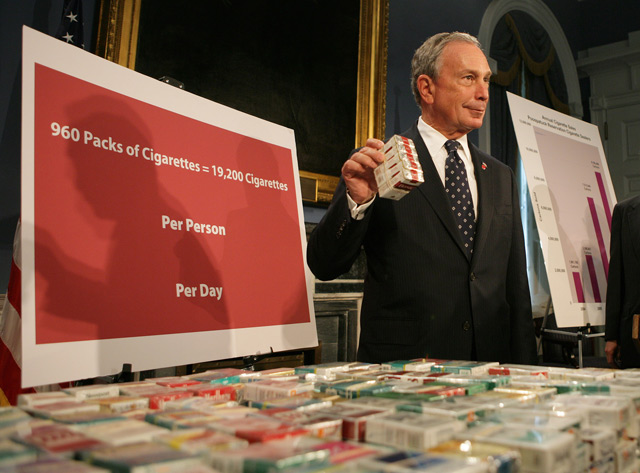 After consistently complaining about the state's failure to enforce tax laws on Indian reservation retailers who sell cigarettes to non-Indians, Mayor Bloomberg took action yesterday, filing a lawsuit in federal court in Brooklyn against eight smoke shops on the 50-acre Poospatuck reservation in Mastic, Long Island. The suit accuses the stores of selling cigarettes to bootleggers who smuggle the cartons off the reservation to sell them in the city, saving smokers a $4.25 per-pack tax.

To drive his point home, Bloomberg spoke to reporters yesterday next to a table stacked with packs of cigarettes, declaring that each of the 279 residents of the Poospatuck reservation (including children) would have to smoke 960 packs, or 19,200 cigarettes, a day to account for the millions of cigarettes sold there in 2007. In New York, reservation residents are allowed to buy cigarettes tax-free, but the lawsuit contends that reservation smoke shops routinely cooperate with bootleggers by concealing illegal bulk sales, by helping load contraband cigarettes into vans, and even making their own bulk deliveries.

Bloomberg also took Governor Paterson to task yesterday for not enforcing the tax law, and framed the suit in the context of the current financial crisis, stressing that the lost taxes amounted to $195 million a year in uncollected revenue, at a time when the city is facing a sizable budget gap. Contacted by the Times, a lawyer for the reservation said he had not yet heard about the lawsuit: “Before we get a lawsuit, before we even get served, [Bloomberg] serves the media first. This debate has reached fanatical levels, where we are being scapegoated from everything from the fiscal crisis in New York to the mortgage crisis. I assume that at some point we’ll be blamed for global warming.”