Bloomberg on Times' McCain Story: "That's Not 'All The News That's Fit to Print.'" 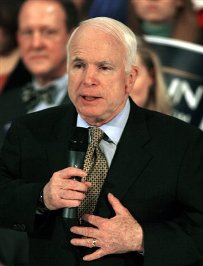 Bloomberg was unimpressed with the Times story, saying, "I think that the story alleged things either explicitly or implicitly that they had no evidence for. That's not, 'All the news that's fit to print." The media mogul also said, "If there is evidence on the record of serious wrongdoing that pertains to somebody's ability to serve, yeah, sure, that is the press's job," but pointed out that NY Times public editor Clark Hoyt was also critical of the article.

As for Nader, whose third party run could theoretically open up doors to his own presidential ambitions, Bloomberg was supportive, "Everybody's got a right to do it - you're not spoiling anything...If people want to vote for you, let them vote for you, and why shouldn't they?" But he's realistic, too, "it would take a lot of money that probably Ralph Nader doesn't have." Subtext: Someone who does have money is...Bloomberg!