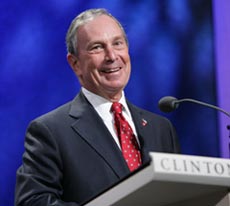 Mayor Bloomberg voiced his thoughts on the souring economy and the steps the city and federal government are taking to address it.

On his $1.5 billion request for city agencies to cut their budgets--$500 million this year, $1 billion next--he said at a civic meeting last night, "We're going to have some tough times. I don't think anybody doubts that ... we have to reduce expenses." He also characterized the cuts as "annoying" but not devastating, according to the Daily News (the News also has a graphic illustrating how these cuts boil down to the some agencies' level).

As for the government's $700 billion bailout of financial firms, Bloomberg doesn't think it should be called a bailout, because he believes the government will make a lot of money. He also supported the idea of executives being paid a lot of money for their jobs; the Observer reported the Mayor as saying the "free market" allows people to "use financial reward as their goal rather than public service" and there's "nothing wrong with that."

And as he did during his Meet the Press appearance, Bloomberg has also been touting the city's mortgage program, pointing out only five out of the over 17,000 mortgages are in foreclosure.

#bailout
#business
#city budget
#economy
#mayor bloomberg
Do you know the scoop? Comment below or Send us a Tip