Bloomberg Not Sexy Enough for Sex and the City 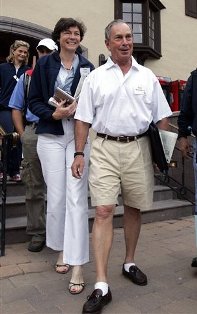 Mayor Bloomberg and the rest of New York City will have to wait for the director's cut to see him in the new Sex and the City movie. CityRoom noticed that he's been griping (jokingly, not red-faced-ly) about being left in the cold.

While giving a commencement speech at the University of Pennsylvania, Bloomberg discussed all the hype for him to enter the presidential race:

I have to admit: All the buzz was very exciting — and flattering. The covers of Time and Newsweek, people from Al Gore to Bono visiting City Hall, I even got a small part in the upcoming “Sex and the City” film. Unfortunately, my scene ended up on the cutting-room floor. Turns out they wanted more sex and less city.

And today, he said, "It turned out that they wanted more sex and less city. That’s fine. Their loss." You know what? It's okay that Mayor Koch is more sexy than Bloomberg.

Bloomberg was filmed in a scene at Bryant Park, presumably at Carrie's and Mr. Big's wedding. While Mayor Bloomberg is usually very nattily dressed, sometimes he dresses down.

The Sex and the City premiere was last night--and it was a true NYC mob scene.

#mayor bloomberg
#movies
#nyc
#sex and the city
Do you know the scoop? Comment below or Send us a Tip
A new Gothamist is coming! We’ve moved comments over to our beta site. Click here to join the conversation and get a preview of our new website.