Bloomberg "Not Running" - But Polling Anyway! 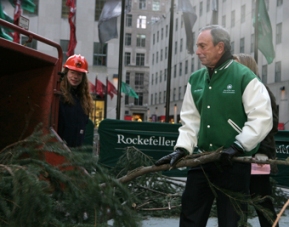 An AP report that Mayor Bloomberg has been "conducting extensive polling and voter analysis in all 50 states" continues to fan the flames of a possible Bloomberg '08 bid. We can just imagine it: People in Alaska, Missouri, Ohio, all getting phone calls and asked, "How would you feel if a billionaire who happened to also be a mayor of a certain urban area decided to run for President - as an independent?"

So far, Bloomberg-related polling calls have allegedly occurred in Wyoming, Minnesota and New Mexico. The Independence Party's Frank McKay said, "it's coming down to one word - polling - and [Bloomberg's] doing a ton of it." The president of polling company told the Sun it could cost up to $30,000 per state to conduct the kind of polling the AP suggests - which means Bloomberg could have sunk $1 million (or more!) on this.

Scott Rasmussen of Rasmussen Reports surmised, "It's a big price if you're a mere mortal and a big price tag if you're a candidate who's depending on contributions from others. I can't imagine anyone else would do it — even the Bush campaign in 2004 didn't. But Mayor Bloomberg is considering something completely unconventional and probably wants to see where he stands in all 50 states. The cost to him is relatively insignificant."

WCBS 2 notes that Bloomberg's denials of a presidential run are growing "weaker" each day. And Bloomberg is experiencing high approval ratings from city residents, according to a Quinnipiac poll, though most don't necessarily want him to run for mayor; about two-thirds believe he has a "moral obligation" to finish his term as mayor.