Bloomberg Makes Time With the Governator 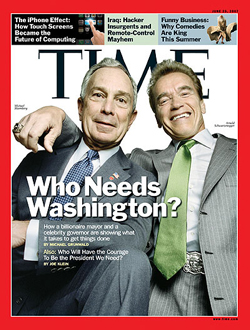 Mayor Bloomberg made the most recent cover of Time Magazine with California Governor Arnold Schwarzenegger as part of an article titled "Who Needs Washington?" It describes how both men have taken the lead on certain issues like the environment and education that the federal government is unwilling or unable to tackle. Time describes both Schwarzenegger and Bloomberg as self-made men who rose from middle class backgrounds to extreme wealth and socially liberal Republicanism.

Some fun is made of the disparity in the two men's physical stature, with Bloomberg being described as "pint-sized" and Schwarzenegger called "fridge-size". In the cover photo, with Schwarzenegger's arm draped around Bloomberg, the perspective makes it look like the Governator could crush our Mayor's head with one hand, especially since he is grinning maniacally. Both men have sterner expressions on an inside photo and Mayor Bloomberg comes about as close as he probably ever will to adopting a gangsta stance.

The article is closed with expressed enthusiasm from billionaire Warren Buffett at the prospect of the Mayor and the Governor teaming up as a for-President team. One would think that if two Republicans could seize the electoral votes of both New York and California, capture the interest of voters in Schwarzenegger's celebrity and respect for billionaire Bloomberg's entrepreneurial success, the GOP might have the makings of a dream team. It would certainly displease more socially conservative party members, but electorally it looks like a slam dunk, with the possibility of turning the country's two largest blue states red.