Mayor Bloomberg's year-end bragging is not over: Just days after boasting how New Yorkers are living longer because of NYC health initiatives, he revealed that the city's crimes continued to fall, based on its comparisons (see below!), and that fire deaths were at near record lows. Mayor Bloomberg said, "Despite tough fiscal times, New York’s frontline public safety agencies - the NYPD and the FDNY - continue to keep our city safer than in any time in recorded history."

Technically, the crime rate was up 0.4%, but, City Room reports, "[Bloomberg's] logic was rooted in a state law that created strangulation as a new class of crime." Here's what the city's press release says:

In 2011, the NYPD’s Compstat crime reporting system adjusted tabulations to account for a new State law, which the City supported, that reclassified strangulation 2nd degree from a misdemeanor to a felony. The reporting change caused the 2011 Compstat report to show an increase in felony assault, which affects the overall crime reporting statistics as well. Using the previous definition of felony assault used in 2010, there was a two percent decrease in that category this year compared with last. Overall crime in 2011, when compared using the definitions of the seven major categories of crime used in 2010, shows a decline of 1.2 percent - marking the 21st consecutive year in which major felonies have decreased in our city.

Of course, there is some question about whether the NYPD is manipulating crime stats, but the NYPD is all over that.

Notably, the murder rate is expected to be slightly more than 500 for 2011, which would be down from the 526 recorded in 2010, and it's the 10th consecutive year that the murder rate has been under 600, since the statistic was first recorded in 1963. (The record low was 2009's 471 murders.) However, rapes are up 3.1%, and domestic murders increased, too. Police Commissioner Kelly said, "Obviously it’s something we are concerned about."

Northeastern University criminology professor James Alan Fox told the Wall Street Journal, "Murder and robbery are the most reliable indicators of the rate of violence," but while the city touts its policing, "More sophisticated and strategic policing has played a part, unlike decades ago. But there's no one reason why crime falls." Other factors driving down crime numbers are "An aging population, high incarceration rates and the stabilizing of illegal drug markets." Regarding the rise in domestic violence, Fox added, "Unemployment is very often the precipitant or at least a contributor to family homicides. It can increase tensions when the person who was once a provider is suddenly unable to do so." 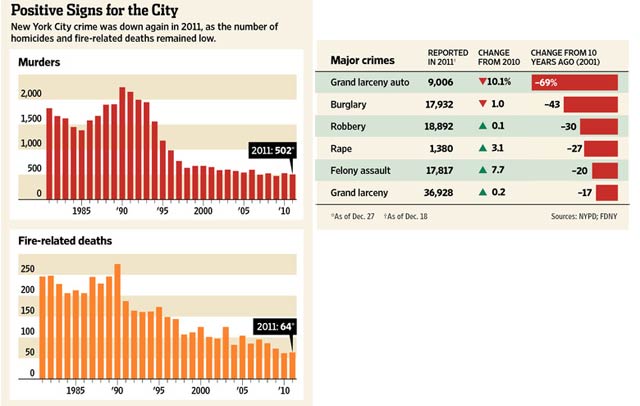 Via the Wall Street Journal

You can see the 2011 crime totals (through December 18) here (PDF). The above graphic from the WSJ also illustrate the 10-year overall drop in crime.

#2011 crime stats
#crime stats
#mayor bloomberg
#nypd
#Ray Kelly
Do you know the scoop? Comment below or Send us a Tip
A new Gothamist is coming! We’ve moved comments over to our beta site. Click here to join the conversation and get a preview of our new website.