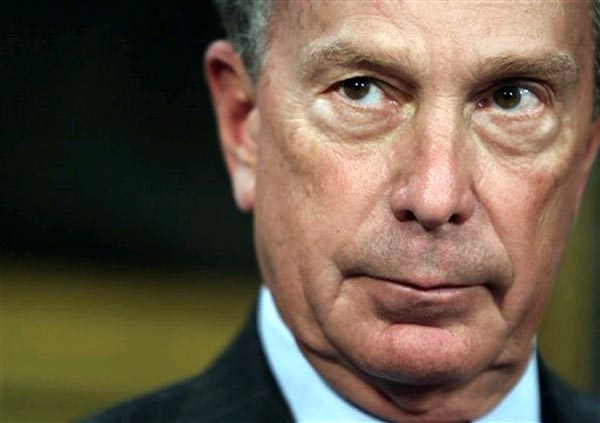 It's happening: Mayor Michael Bloomberg will reportedly announce that he will seek a third term on Thursday. The NY Times writes, "The extraordinary move promises to upend New York City’s political world.."

Three people tell the Times that the billionaire mayor will "propose trying to revise the city’s 15-year-old term limits law, which would otherwise force him and dozens of other elected leaders out of office in 2009." And he will use the financial crisis as a reason for why he should be in office for four more years.

This comes after the NY Post reported today that Ronald Lauder, another billionaire who spent millions on voter referendums to introduce two-term limits for city lawmakers, supported the idea of Bloomberg pursuing a third term in these difficult times, "To me, Mayor Bloomberg's brilliance in the financial sector, particularly Wall Street, would be invaluable." It's believed that the City Council would pass legislation to overturn term limits in this instance.

City Comptroller Bill Thompson, who has been eying a mayoral run next year, told WCBS 880, "I will be very disappointed if the Mayor attempts to do this to the legislation of the City Council. He will undermine the will of the voters, who under two occasions have said they believe in term limits. Any change to that law should go back to the public."

#City Council
#Elecition 2009
#mayor bloomberg
#nyc
#term limits
Do you know the scoop? Comment below or Send us a Tip