Bloomberg is #1 Enemy of Pot...holes 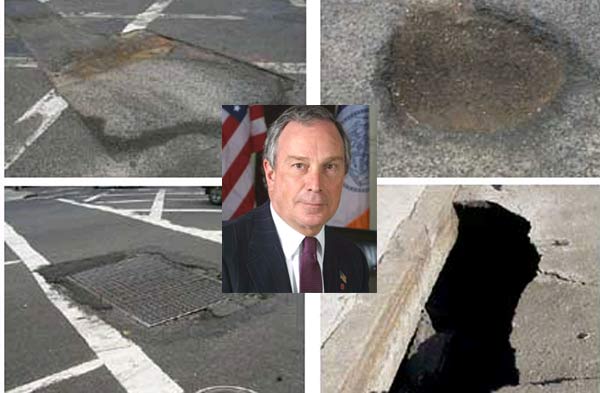 Mike Bloomberg may end his tenure as the Mayor of Pothole Repair. Under Bloomberg's watch, the city has filled 1.25 million potholes since 2002. While anybody that hits potholes with their bike or their car surely thinks the city missed a few, Mayor Bloomberg assures us that they are doing what it can to fix them. In his first public appearance since returning from Asia, Bloomberg said, "Now, potholes are as much a part of city life as hot dog carts and yellow cabs, although that hasn't stopped us from doing everything we can to fix them once they appear."

The Mayor also touted improved pothole filling since 2002. Now 99% of potholes are filled withing 30 days, while only 65% were filled in the same time period in 2002. Since it's the start of pothole season (cold weather in the winter aids pothole development), Bloomberg urged people to report their local pothole by calling 311.

Some fun pothole-filling stats for you: New York City fills the equivalent of 22 potholes an hour, 24 hours a day, 365 days a year. That's 192,720 potholes a year! Lest you think all this pothole repair is unimportant, Bloomberg claims the assault on the holes helped cut traffic fatalities 20% since 2001.

Bloomberg also said that he's open to alternative plans on congestion pricing. So long as the number of cars coming into the city are decreased, revenues are generated for mass transit, and the federal government accepts the plan. Perhaps fewer cars in the city would also help keep pothole numbers down!