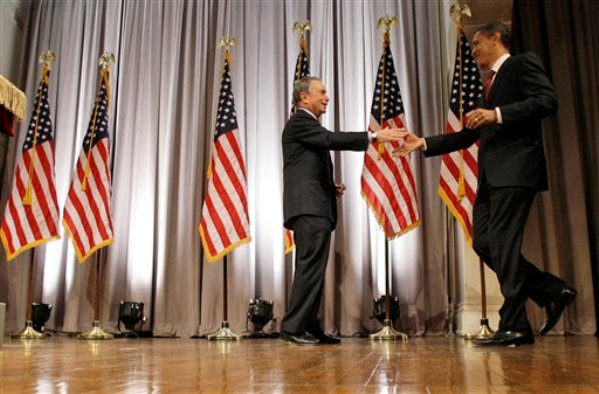 Presidential hopeful Barack Obama will be speaking in NYC today, as part of Cooper Union Dialogue Series. And Mayor Bloomberg's office "took the highly unusual step" of issuing a release letting the media know Bloomberg would be introducing Obama. Aw, that's what any billionaire mayor would do for his breakfast buddy!

Though Bloomberg hasn't decided on supporting a presidential candidate yet, he did say, when announcing he would not run for president, he'd support a candidate who "takes an independent, nonpartisan approach." And one of his aides did float the idea of an Obama-Bloomberg ticket.

Obama's speech is expected to be about the economy. And the odds are high that another man from Illinois, Abraham Lincoln, who gave a speech at Cooper Union on Feburary 27, 1860, will be mentioned.

If you're going to the speech, let us know how it was. And if you take pictures, send them to photos(at)gothamist(dot)com or tag them "gothamist" on Flickr.

Update: The Daily Politics' Elizabeth Benjamin reports that Bloomberg gave Obama a warm welcome, but didn't endorse him, "I have not endorsed a candidate for president, but have been very clear in my hope that all the candidates will explain in detail how they will address the great challenges in our country. And I hope they will all come here to this great hall to do it." Bloomberg added that not everyone will agree with Obama, "This is New York, after all."

"At a time when Washington is divided in old ideological battles, he shows us what can be achieved when we bring people together to seek pragmatic solutions.

Not only has he been a remarkable leader for New York –he has established himself as a major voice in our national debate on issues like renewing our economy, educating our children, and seeking energy independence.

Mr. Mayor, I share your determination to bring this country together to finally make progress for the American people."

Obama also said the U.S. is definitely in a recession, due to the subprime mortgage crisis and the war. He said McCain's economic plan "amounts to little more than watching this crisis happen." Obama presented six principles to help reform and "establish a 21st century regulatory system":

Here's the advance text of his speech.

#barack obama
#cooper union
#election 2008
#michael bloomberg
#politics
Do you know the scoop? Comment below or Send us a Tip