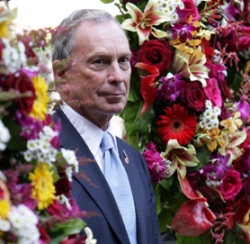 The best part of Mayor Bloomberg's maybe, maybe-not presidential aspirations is that we can debate about whether they are going to happen until the Democratic and Republican conventions next year! The NY Times now reports that the "excitement seems to have fizzled" about the idea of Candidate Bloomberg. It's a bit more detailed that Dan Rather's August proclamation that the Mayor would not run for president.

Why? Mainly because of the "mayor’s unorthodox approach to politics and the mathematics of the Electoral College." The unorthodox approach to politics would be how he belittles both parties for playing politics (which appeals to many people) and then says stuff like how the Iraq War is a lot like the Revolutionary War, but the U.S. is now the British (which is more nervous-making to some), as he did during a talk with Tom Brokaw at Cooper Union two weeks ago: "I'm not suggesting the motives are the same. But I'm just pointing out that this was an insurgent kind of attack on trained, disciplined, uniformed soldiers who fought in a rigorously planned way. And we're trying to adjust to that." You can watch the interview right here, at Bloomberg's non-mayoral official website, mikebloomberg.com.

The other problem is that even with Bloomberg's billions to throw at a campaign, he may not be able to win a significant amount of electoral votes. A Hillary Clinton fund-raiser, Robert Zimmerman, tells the Times, "At the end of the day I don’t think Mike Bloomberg wants his legacy to be that he was a spoiler.” Well, Clinton and Giuliani certainly don't want Bloomberg's legacy to be a spoiler. But Bloomberg does raise some good points. Maybe he should be in the presidential debates anyway!