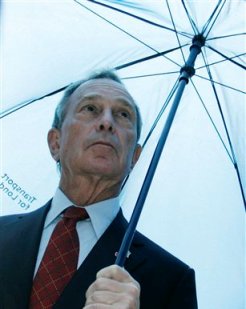 Mayor Bloomberg was named in a bias lawsuit filed by three former Bloomberg LP employees. This now accompanies a lawsuit, which charges that female employees were discriminated against, that the Equal Employment Opportunity Commission filed against the billionaire's media company earlier this week. The lawsuit says, "Upon information and belief, Michael Bloomberg is responsible for the creation of the systemic, top-down culture of discrimination which exists within Bloomberg."

The Sun reports that the three women, Jill Patricot, Tanys Lancaster, and Janet Loures, offer "the first detailed timeline of the demotions, pay cuts, and responsibility scalebacks they are alleging," such as a Patricot being told by a (female) supervisor that her career was "'paused' because she had a child."

Additionally, they allege that Bloomberg is still very involved with the business, contradicting the Mayor's claim, "I haven't worked there, as you know, in an awful long time." The Post also notes that the suit alleges that current Bloomberg LP CEO Lex Fenwick and Bloomberg "communicate about discrimination complaints by company employees and how the human-resources department responds." Fenwick is accused of firing two pregnant employees and saying, "I'm not having any pregnant bitches working for me."

A Bloomberg LP spokesperson said the lawsuit was a "publicity stunt," and that "it sounds like an effort to damage reputations and stir up publicity to pressure the company for financial gain." The lawsuit does not cite any specific example of Bloomberg's actions; the Sun spoke to University of Virginia political science professor Larry Sabato who suggested Bloomberg's inclusion in the lawsuit could be a way to attract more attention and more money. The three women are seeking $48 million each.

Bloomberg LP has been sued in many states, and the NY Times writes, "The lawsuits depict a workplace intolerant of older workers, of women and men who needed extra time for child care, and of people with disabilities or health problems."

Photograph of Mayor Bloomberg while in London by Sang Tan/AP