Bloomberg Having His Doubts on Term Limits 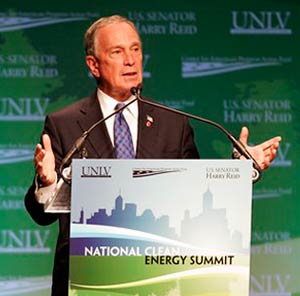 Mayor Mike sure likes to keep people guessing. Yesterday the mayor altered his position on any extension to the term limits law, saying that he would consider a change to the rule that will force him out of office next year if City Council were to send a bill his way.

Less than a year ago, the mayor said he thought that the council should be stripped of its ability to extend term limits, which voters have elected in favor of twice. There has been lingering speculation that he wants to stay in office, in spite of his aidess proclamations Bloomberg doesn't want to serve another term. Then yesterday, Bloomberg said, "If the City Council comes to us with a piece of legislation, we will look at it, we will consider it, and we will make what I hope is an informed judgment as to what is in the best interest of this city."

He claims that he is still as in favor of term limits as he always has been, however he added, “Whether it's one term, two terms, three terms, I think you can debate that.”

Speculation is that the mayor and Speaker Christine Quinn are plotting to change the law. Quinn has been opposed to term limits for years, but also had said a year ago that she wouldn’t support any change to the law. The mayor is not the only one being forced out of office next year because of the two-term statute—36 out of 51 council members are also at the mercy of term limits in 2009, including Speaker Quinn. Opposition to any change of the law has been led by fellow billionaire Ronald Lauder and former Bronx Borough President Fernando Ferrer. Both have previously waged unsuccessful campaigns to become mayor.

#christine quinn
#mayor bloomberg
#term limits
#third term
Do you know the scoop? Comment below or Send us a Tip