Bloomberg Has Party for Clinton 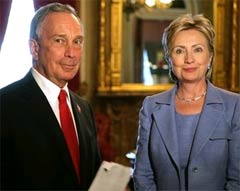 Last night, Mayor Bloomberg held a reception for Senator Hillary Clinton at Gracie Mansion. He emphasized that he wasn't going to help her relieve campaign debt, saying he wasn't asked for money and added, "Hillary Clinton has been a very good, hard-working senator. I’ve said that every time that I’ve been asked for the last half-a-dozen years. Every time I’ve ever called her she returns the call virtually instantly. And she has worked very hard on everything that I’ve pointed out is a New York City priority." (Of course, the Sun points out Bloomberg wasn't happy when Clinton wouldn't endorse him for re-election.)

The Observer's Azi Paybarah has a report of the evening: Guests included Representative Charles Rangel, Governor David Paterson, Senator Charles Schumer, Barbara Walters, and Chevy Chase, and Clinton thanked everyone and said she was happy to see "so many of my friends, catching up with all of you, knowing that many of you put your ideas and your requests on hold, and now, the hold is off. And I am open for business a hundred percent of the time.”

Azi also has a funny video of Clinton speaking about how Bloomberg seemed very interested in her presidential campaign:

#gracie mansion
#hillary clinton
#mayor bloomberg
Do you know the scoop? Comment below or Send us a Tip