Bloomberg Has Many, Many Billions 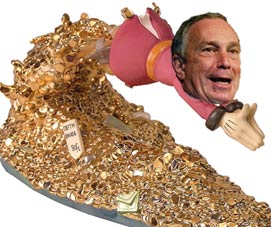 Yesterday, it was reported that Mayor Michael Bloomberg would buy back 20% of his company, Bloomberg L.P., from Merrill Lynch for $4.5 billion. That figure finally gave the media more of an idea of his wealth.

Forbes had estimated Bloomberg's wealth in the neighborhood of $5.2 billion, but now that he'll own closer to 80-90% of Bloomberg L.P, the number is at least ten billion more. The Sun suggests it's "about $20 billion", while the NY Times is more conservative, offering $16.2 billion as a possible net worth.

At a press conference today, a reporter asked him, "will the children of New York City will look at you differently now because you’re worth more than we initially thought?" and Bloomberg answered with his man of the people shtick, "I have no idea what you thought I was worth. I get paid a dollar a year. I have my senior’s MetroCard for the subway every day. All I can tell you is that I went to public schools, and I was taught that if you worked hard, then the great American dream is open to you. And sadly, that’s not true for too many kids in our schools."

And while Bloomberg has professed to be looking forward to devoting time to his post-mayoral life to philanthropy, the Sun reports his wealth could help him do something crazy, like buy the NY Times.

#billions
#bloomberg lp
#mayor bloomberg
#Merrill Lynch
#scrooge mcduck
Do you know the scoop? Comment below or Send us a Tip