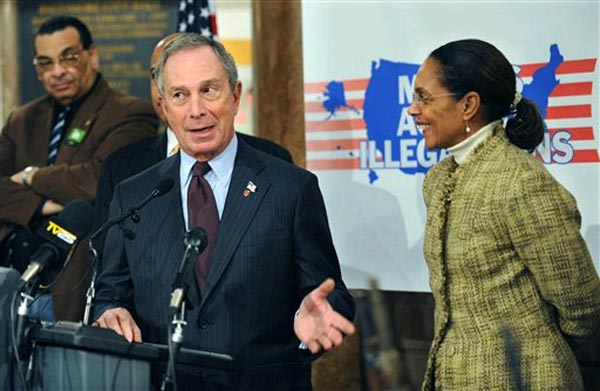 Now that there seems to be a compelling 2008 presidential race, Mayor Bloomberg's White House prospects appear diminished. And associates of the billionaire suggest to the NY Times that post-mayoral life may not be enough for Bloomberg.

After being splashed on covers of magazines (New York magazine called him the "sane Perot," Time with Arnold Schwarzenegger, Newsweek as the "Billion Dollar Wild Card") and breathlessly debated as a potential third party candidate (or spoiler) for over almost two years, the possibility of being the most powerful man in the country, if not world, has really gotten under Bloomberg's skin. Sure, being rich is great, but being the commander in chief would be priceless. And this comment made to the Times was telling:

“He was extremely successful, and then he was extremely successful as mayor,” said Michael H. Steinhardt, a hedge fund manager turned philanthropist, and a longtime friend of Mr. Bloomberg’s who played host to an early presidential strategy session. “Now where does he go from here? He doesn’t really care that much about his philanthropy. I think he likes hearing himself talk publicly — terrible way to put it, but I think that’s right.”

What? Bloomberg has been claiming he'd dedicate himself full time to his philanthropic organization while dodging presidential rumors! New Yorkers must be shocked, shocked to find that Bloomberg might have been hiding his true intentions! But also, ha! on how Bloomberg likes to hear himself speak publicly. That Steinhardt - he's quite a friend.

Naturally, Bloomberg declined to be interviewed, but others say "Mr. Bloomberg has been acting grumpy as he faces decisions about what to do next." Maybe he should do some more polling to ask people what he should do.