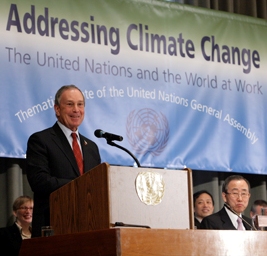 The Mayor was addressing reporters after speaking at the United Nation's conference on climate change. He mentioned the city's plan to reduce the use of tropical hardwoods because the deforestation accounts for 20% of greenhouse gas emissions. NYC is one of the world's biggest consumers of tropical hardwoods, as they are used in park benches, promenades, docks, etc. Bloomberg also emphasized that the U.S. should have a carbon emission tax.

Last summer, Mayor Bloomberg and mayors from around the world convened to discuss environmental issues at the NYC Climate Summit; Bloomberg said another would be held this June. And for fun, during his speech, he said, "Of course, being the Mayor of New York - the world's most international city - is a bit like presiding over the United Nations every single day of the year."

#bloomberg
#climate change
#environment
#global warming
#mayor
#mayor bloomberg
#new york
#nyc
#the city
#The Mayor
#united nations
Do you know the scoop? Comment below or Send us a Tip