Bloomberg Getting Bloomies in a Bunch More Often 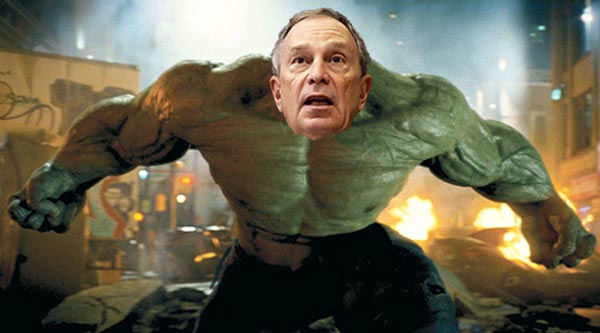 Mayor Bloomberg's annoyed response to a Newsday reporter's question last week (or was it his disdain at a different press conference the week before) has seemingly inspired Diane Cardwell's section A NY Times article, "As Term Wanes, Bloomberg’s Temper Boils Up." Apparently lame duck status coupled with many of his pet projects failing or on the brink of failure, Bloomberg is getting more testy that usual. Or, as Cardwell puts it, he's been more "short-tempered, scolding, even petulant" in public.

City Councilman Peter Vallone Jr. recounts how Bloomberg started screaming at him about a Queens power plant (Vallone opposes it), "He kept raising his voice. ‘What’s the matter with you? You know we need the power.'" And, per "former and current associates," Bloomberg "might scream, 'You’re destroying my administration!' at an aide over a slip-up" in the open office environment at City Hall.

Bloomberg's spokesman says, “Mike Bloomberg is only human, and since he first started running for office in 2001, New Yorkers have seen him happy and sad, irritated and elated.” And Assemblyman Keith Wright offered a bright side--Blooomberg's frustration is driven by a desire to get things down and "pales in comparison" to Spitzer's attitude (Wright once called Spitzer a "Democratic Giuliani".

#anger
#lame duck
#mayor
#mayor bloomberg
Do you know the scoop? Comment below or Send us a Tip