Bloomberg Excited For an "Adult" President 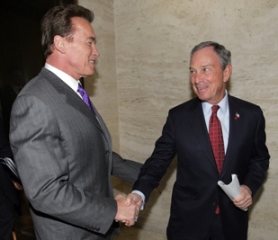 Mayor Bloomberg threw a zing at the White House when discussing the 2008 Election. When telling reporters that he would endorse the most straightforward candidate, he added, "at least we'll have an adult in office who can lead and can accomplish something."

Yesterday, the Mayor co-hosted a lunch with his soul mate, California Governor Arnold Schwarzenegger, and they spoke to business and political bigwigs. The Mayor also distributed the NYC Card, which has "easy-to-reference talking points" about issues important to the city, for when these potentials donors are hit up for money.

The City's Card six priorities are after the jump. Bloomberg said, "We need state and federal legislators who come to New York City for money to understand this City’s priorities – and to vote accordingly. Our agenda in Washington is about ensuring a safer, stronger, and more livable city for all New Yorkers. City Card helps us hold those who come here for cash accountable for supporting our future.”

The six priorities listed on this year’s New York City Card are:

* Increased Support for Infrastructure: Maintenance of the City’s infrastructure is vital to the economic well being of New York City and the whole nation. Increased funds to repair transportation, water and sewer systems are needed to ensure long-term reliability and quality of our infrastructure.

* 9 /11 Worker and Resident Health: The City is seeking a minimum of $150 million annually in federal funds to ensure that those who are sick or who may become sick as a result of the September 11, 2001 terrorist attacks have the first-rate heath care they deserve.

* Affordable Housing: State and Federal legislation is required for targeted and effective financial incentives to produce affordable housing for New Yorkers as part of Mayor Bloomberg’s plan to create and preserve 165,000 affordable units by 2013, the most ambitious municipal housing plan in the country.

* Post 9/11 Tax Trade-In: Congress must take the final steps to enact legislation that would allow the City to secure the final $2 billion in Federal funds previously committed to allow them to be used for transportation projects in New York.

#City Card
#election 2008
#mayor bloomberg
Do you know the scoop? Comment below or Send us a Tip