Bloomberg Doesn't Want You to Fake Purse It 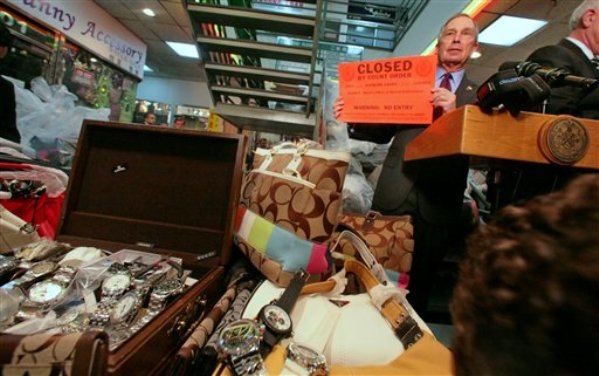 Nothing says press conference like raiding a 32 stores in what the city dubs "Counterfeit Triangle" and hauling away over a $1 million worth of brand-name products. The raid, taking down stores in the area bounded by Canal Street, Walker Street and Centre Street, occurred in the early morning, with cops using bolt-cutters to gain entry and tractor-trailers to take the haul away Coach, Gucci, Dolce & Gabbanna, Dior, Prada, Rolex, Fendi, Burberry, Calvin Klein, Dora the Explorer and Oakley merchandise.

Mayor Bloomberg said, "Counterfeit goods cheat the City, consumers, legitimate business owners, and trademark holders and their proliferation is standing in the way of the revitalization of Chinatown...hey are sold by unscrupulous merchants that have been linked to money laundering operations." And Police Commissioner Ray Kelly said, "We need consumers to help us instead of burying their heads in the sand. No matter how 'victimless' a crime may appear, when you scratch the surface you are bound to find some unpleasant realities." Dudes, tell it to the tourists you're so desperate to attract - the #2 destination on their itineraries in where to buy a fake purse (#1 is Ground Zero, #3 is Century 21).

The NYPD and the Mayor's Office of Special Enforcement investigated the stores for two months and gained the cooperation of the estate of Vincent Terranova, which owns all the property where the counterfeit goods were sold. A year ago, the estate had agreed to "get rid of counterfeit sales and to allow a monitor to inspect their buildings.