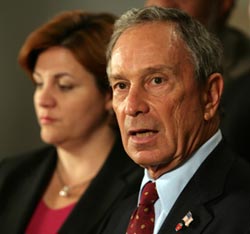 Is it shocking that Mayor Bloomberg may ignore the City Council by refusing to issue the $400 property rebate checks to homeowners? The NY Times calls him "defiant," as he said yesterday "that he had no plans to release the money." And the Post quotes him as saying, "We have no money. I think that's what you have to understand. This is not a legal issue; this is a fiscal issue."

Earlier, Bloomberg said he would take $256 million used for rebates to save money, but it turned out that the City Council must approve canceling the rebate--and the Council is highly unlikely to do so.

City Council member Vincent Ignizio, who filed a lawsuit to keep the rebates checks coming, notes that the money could mean a lot to people planning for the holidays and City Council Speaker Christine Quinn said, "I can guarantee New Yorkers we are going to fight as hard as we can to get them those checks as quickly as possible." And Council member Lew Fidler called Bloomberg's atittude "the height of arrogance."

Bloomberg's spokeman Stu Loeser said, "Nobody wants to send money more than he does. The question is, how are we going to pay for them, when we already proposed eliminating a Police Academy class, and reducing hours overnight at certain firehouses?” The Mayor, though, may be hedging his bets: "We obviously aren't going to send out checks when we don't have the money... for the moment."