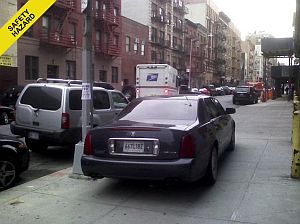 Mayor Bloomberg has announced that the city will crackdown on the abuse of parking permits issued to civil servants, reducing the overall number by 20%. The change comes after the Post revealed in November that “149 separate government entities had qualified for the coveted placards last year, ranging from the state lottery to the US Navy recruiting office, which was allocated an astonishing 110 permits.”

In fact, so many agencies produce and distribute the parking placards that the city has no idea how many are out there! The mayor's office guesstimates 70,000, but Transportation Alternatives, who run a website that posts photos of illegally parked cars with permits, says 150,000 is more like it because of all the counterfeit and expired placards out there.

This is huge. The 20 percent figure is substantial. This is really taking a whack at bad government and the culture of entitlement that developed around these permits. Government workers commute at twice the rate of everyone else because they have free parking at the other end, in the form of one of these placards.

The new plan, intended to cut congestion and pollution as well as corruption, goes like this:

And the much-maligned parking privileges for cops at local precincts are will also be reduced, according to mayoral decree. But who will police the police? Streetsblog cuts to the heart of the matter with a telling pull quote from one anonymous cop at NYPD Rant:

"if the city yanks our plaques, then the war is on. the pba can have some printed for its members, active and retired, and i will bang out every car with official plates that is illegally parked or runs a light (the offenders can explain themselves in front of an administrative judge at AAB or parking violations bureau)....JUST WAIT AND SEE."

What do you think? Good news for congestion or an overly-zealous attack on the public trough to which our civil servants have grown so accustomed?

Photo of a Postal Service employee's vehicle parked on the sidewalk via Uncivil Servants.