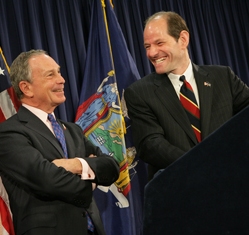 Even though speculation is running high/wistful on a Michael Bloomberg presidential candidacy (maybe because all the other confirmed candidates are boring - or reporters are bored of covering the other candidates), the Post resurrects a rumor from earlier this year: Bloomberg wanting to run for governor against Spitzer in 2010.

Back in May, the Post claimed the Mayor had discussed running for governor on two occasions, but the Mayor said the reports were completely made up. Now the Post reports that Deputy Mayor Kevin Sheekey spoke to a GOP bigwig about the possibility of a Bloomberg gubernatorial candidate just last month. A source says Sheekey told former GOP Chairman William Powers (now the NY co-chair of Giuliani for President and helped get George Pataki elected back in 1994) "that he'd like to talk about the governor's race, and they're going to do it."

If the rumors are true, it sounds like Sheekey's plans for Bloomberg's post-mayoral life are a presidential run (if the Democratic and Republican candidates look vulnerable) and a gubernatorial run if the presidential run doesn't pan out. These days, Bloomberg would probably win if he went up against the Steamroller, and becoming governor would probably give him time to spar with Assembly Speaker Sheldon Silver all the time!

Update: Bloomberg denied the latest rumor this morning and said something along the lines of "I want to fix the state from Gracie Mansion, not from Albany." Also, Gracie Mansion is way closer to his townhouse than the Governor's Mansion.