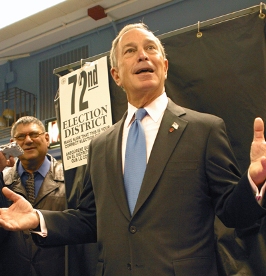 Bloomberg said, "This is just an outrage," and decried the Board of Elections for being a "partisan patronage organization": "What they do is hire on the basis of politics, and obviously the people that they have aren't as competent as you would like, because the results that they reported just defies credibility." Bloomberg also sniffed, "If you want to call it significant undercounting, I guess that's a euphemism for fraud."

The Democratic co-chair for the State Board of Elections believes human error, plus ballot design, might have played a role in the undercounting. Doug Kellner told the Post similar errors have happened before and noted since Obama's name followed many candidates who probably received zero votes (see this image), "the likelihood of a zero’s going in the Obama column was a lot greater than a zero’s going in the Clinton column."

The good government group the Citizens Union also sent a letter to Governor Spitzer (cc'ing Attorney General Cuomo); executive director Dick Dadey wrote, "What most troubles us is that this problem appears not to be an isolated incident in one or two election districts that could be attributable easily to simple human error, but points possibly to the existence of a widespread systemic problem." The full letter is after the jump; official NYC primary results are expected next week.

With Obama's wins in Wisconsin and Hawaii, Hillary Clinton has started to focus on Obama's rhetoric. At a Hunter College event today, she said, "It's time that we move from good words to good works, from sound bites to sound solutions ... This campaign goes on!" Hmm, maybe she needs some Clintones (above).

Letter from the Citizens Union to Governor Spitzer

I write to express the very serious concern of Citizens Union for the reported irregularities in the tabulation and reporting of the initial election results for the Democratic presidential primary on February 5th, and urge you to ask whatever appropriate state authority or the Attorney General, if necessary, to undertake an investigation into what occurred and the reasons for any discrepancies, and explore what remedies are needed to prevent future occurrences of this kind.

As has been reported in several news publications, it appears that in as many as eighty election districts in the City of New York, presidential candidate Barack Obama received no votes. Reports also show that this problem was not isolated to his candidacy, but also affected Hillary Clinton's as well, though to a far lesser extent. The fact that two major presidential candidates would not gain even one vote out of several hundred cast in certain election districts strains credulity, particularly in districts like the one in Harlem where one would think Obama would have demonstrated a respectable, if not strong, showing.

What most troubles us is that this problem appears not to be an isolated incident in one or two election districts that could be attributable easily to simple human error, but points possibly to the existence of a widespread systemic problem.

New Yorkers must have confidence in the integrity of our election system and that when they vote, their vote counts. This problem of underreporting in initial but uncertified vote tallies brings to the forefront many questions not only about how votes are counted, but also how our elections are administered.

No one knows the extent of the problem or what caused it, but the citizens of New York deserve to know. New Yorkers need to be assured that elections are conducted in the most impartial non-partisan manner possible and that great care is taken to report election night results to the media that are as accurate as possible, even if they will not be certified until several weeks later by the board of elections. The bottom line is that those early results were inaccurately tabulated by poll workers of the city board and reported to the media. Given the historical significance of this election, the hometown advantage of Clinton, and the national spotlight being shown on New York State, it was imperative that our city results were correct, which may ultimately appear not be the case. While the certified results will not change which candidate received the most votes, it is possible that these results might alter the delegate allocation indicated by the election night count. Even if the delegate count does not change, the certified electoral margin could be significantly different from the all-important reporting of the margin the night of the election, which would undermine the integrity of the vote and the confidence we need to have in our system of election administration.

I ask you to work with the appropriate state authorities and Attorney General Cuomo to find out what happened on the night of February 5th, report back to the citizens of New York and take whatever steps are necessary to reform the administration of our elections so that public confidence is restored.