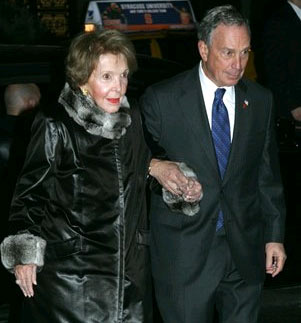 Mayor Bloomberg may deny any desire to run for president in 2008, but his non-NYC homework seems to suggest otherwise. According to the Huffington Post, he has regular foreign policy briefing session "on a wide variety of topics...from non-proliferation to the defense budget, with a specific focus on the war in Iraq."

Who has been briefing him? Former U.S. Ambassador to the United Nations and an adviser during the Clinton administration Nancy Soderberg: "One source described her as 'Bloomberg's Condi.'"

When he first ran for mayor in 2001, Bloomberg changed his party affiliation from Democrat to Republican, and then this past June, Bloomberg left the Republican party to become an independent, suggesting he - and his billiions - was gearing up to be spoiler candidate in 2008. Bloomberg claimed becoming an independent was more indicative of his nonpartisan approach that "worked wonders in New York" but his extensive travels abroad and in the country seem to say otherwise. While he says he wants to finish out his second term as mayor (which means through 2009), his aides have been investigating a presidential bid. And of course, there was that recent Newsweek cover that was practically an endorsement for a Bloomberg presidency.

Recently, Bloomberg has been rumored to be Spitzer's opposition in the 2010 governor's race. He has also held a fundraiser for the Ronald Reagan Library. The thinking is that he'll wait and see who the Democratic and Republican candidates are, consult a lot of pollsters, and then decide whether to go for it. So expect more stories about him learning more about presidential topics, like what kind of furniture will fit in the Oval Office.