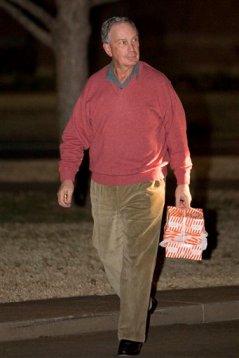 Armed with cheesecake from Junior's, Mayor Bloomberg headed to Oklahoma for the summit of Republicans and Democrats to discuss a third party White House run. Organized by former senators David Boren and Sam Nunn at the University of Oklahoma (which Boren is the president of), the group has been working since meeting last night . Here's some of Boren's opening statement:

We have come together at a crucial moment. These are not ordinary times. For the first time in history, polls tell us that a majority of Americans no longer believe that our future will be as great as our past. We must band together to reject that pessimism. We must reassert the “can do” American spirit which embraces the future with all its possibilities.

We also have the joint statement from the participants (including former elected officials such as Bill Cohen and Christie Todd Whitman as well as current senator Chuck "Often mentioned as a running mate for Bloomberg" Hagel) after the jump.

Of course, most of the focus is on Mayor Bloomberg and the possibility he might run for president. While the billionaire has denied he's running in 2008, his pollster Doug Schoen told the LA Times, "Bloomberg is going to spend the next two months doing an assessment of his prospects.” As for Bloomberg has said in Oklahoma, the Daily Politics reports he said, "Look, I am not a candidate, number one. I am a former businessman and a mayor," as well as some flowery words about America being "the most wonderful country that anybody has ever created."

Oh, and the cheesecake flavors? Plain, chocolate swirl and raspberry swirl - and no trans fats.

A NONPARTISAN APPEAL TO A NATION AT RISK:

America is in danger. Our ability to meet and solve the problems that face us is seriously compromised. National surveys reveal that an unprecedented seven out of ten citizens believe that life for their children will not be as good as their own. We are headed in the wrong direction. We share their deep concern and frustration. Our nation is indeed at risk.

• Approval for the United States around the world has dropped to historically low levels, with only one out of four people approving of our country’s actions, even in nations that are our longtime allies;
• We have eroded America’s credibility and capacity to lead on urgent global and foreign policy issues including terrorism, nuclear nonproliferation, climate change, and regional instabilities;
• Our budget and trade deficits are out of control. We are squandering our children’s future. The ominous transfer of our national wealth has made our economy vulnerable, and our economic strength and competitiveness are both declining. Middle-income Americans are struggling to keep their homes and jobs and educate their children.
• We are not as secure as we should be. Our military is stretched thin and our nation remains vulnerable to catastrophic terrorism.
• We are being held economically hostage because we have no energy policy worthy of the name.
• Our educational system is failing to prepare our children to succeed in a globalized and technological world.
• Nearly 50 million Americans remain without health insurance, and the cost of medical care continues to spiral.
• The failures of bridges in Minneapolis and levees in New Orleans are harsh metaphors for the reckless neglect of our infrastructure.

These critical issues are uniquely interlocked and we must have a national strategy and prioritization of resources. We are failing to address them because rampant partisanship has paralyzed the ability of our government to act. If we allow polarizing politics to continue, we will remain a nation divided and no matter who is elected this fall, he or she will not have a mandate for governing. Too many in both our parties have sought to energize their bases instead of reaching out to address the issues that concern our nation as a whole. They appeal to extremes and marginalize those in the commonsense center.

In order to break this partisan impasse, we urge the presidential candidates to provide:

• clear descriptions of how they would establish a government of national unity;
• specific strategies for reducing polarization and reaching bipartisan consensus;
• plans to go beyond tokenism to appoint a truly bipartisan cabinet with critical posts held by the most qualified people available regardless of political affiliation; and
• proposals for bipartisan executive and legislative policy groups in critical areas such as national security.

National elections present an opportunity for candidates and citizens to have a serious and civil discussion of the imperative issues facing our country at home and abroad. Today, we urge our fellow citizens, including the news media, to join us in asking the candidates to address these challenges.

If as a nation we begin to ask, debate, and address these and other fundamental issues, we can renew our commitment to community and empower those we elect to govern effectively.

We are convinced that if we establish a government of national unity, we can meet these challenges head on, develop a cohesive strategy prioritizing our responses and matching our goals with our capabilities. In short, we believe that if we unify, we can turn America’s peril into America’s promise and face our future with optimism.