Bloomberg Annoyed with the City Board of Elections 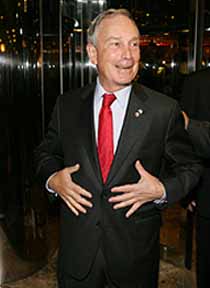 Mayor Bloomberg criticized the city's Board of Elections, after BOE officials said Election Day could be chaotic, "This is a joke...this public is badly served by this agency as any city or state thing I've seen."

Yesterday, a number of reports noted concern over whether the BOE would be able to deal with the hundreds of thousands of new voter registrations and Election Day itself, and the BOE has cited under-financing as a reason for possible isues. Specifically, Board official Frederic Umane had said, "We just hope that people would be as patient when they try to vote as they would be trying to wait for a hamburger at one of the more fancy hamburger places, which I understand the lines can be up to two or three hours."

However Bloomberg, who is no fan of the partisan BOE, said, "We've got a check for $20 million, just sitting there. All they have to do is pick it up. But they're not getting the money until they tell us what they're going to do with it. This is preposterous." He further explained, "They keep saying they need more money and they won't tell us what they want to do with it. We keep making suggestions, putting a sample ballot on the web; they won't do it. What about recruiting poll workers who have to have training before? We require training. They don't pay any attention to it. What about poll workers from good government groups, rather then just political parties? You know, this is an outrage."

The BOE's spokeswoman called Bloomberg's remarks "unfortunate" since it's "less than a week before a historic election where we expect unprecedented turnout." And Umane told NY1, "We believed we're as ready as we could be. If we had money, we could hire an extra 50, 70, 100,000 people to work. We've hired an excess of 36,000 people. We hope most of them show up."

#bloomberg
#Board of Elections
#Election day 2008
#mayor bloomberg
#voting
Do you know the scoop? Comment below or Send us a Tip